Plant a tree in memory of Clare
An environmentally-friendly option 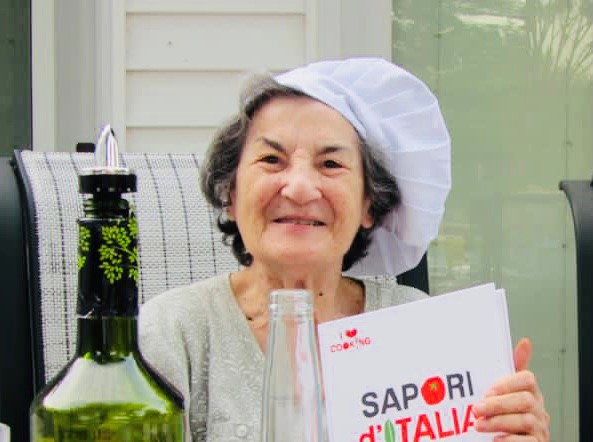 Clare A. Barsotti (nee Lucidi) was born in Trenton, NJ on November 5th, 1923, and passed away in Alexandria, VA on April 14, 2021.  She was the oldest of five sisters.  Her parents had immigrated to this country from Italy, both as very young children. Theirs was the story of many immigrants who came here to look for a better life, and the Lucidis succeeded through hard work, perseverance, and strong ties to their family and the Italian American community. Clare’s parents only had an elementary school education. But her mother’s main goal in life was for her daughters to be fully American and to be educated. All five girls graduated from high school and all but one graduated from universities in the New Jersey and Pennsylvania area.

In addition to math, Clare’s other life passions included music, cooking, and her deep concern for social justice. Throughout her life, Clare involved herself in efforts to help people who were less fortunate or faced discrimination.

The proximity of her home town of Trenton, to Princeton, made it possible for the Lucidi sisters to spend a lot of time there, enjoying themselves with friends and meeting Princeton students.  So, it was no surprise that Clare met Iacopo, a young PhD student from Northern Italy, who had just come out of World War II, and had received a Fullbright scholarship to continue his studies in mathematics at Princeton.

Clare and Iacopo married in 1951. Clare left her job as an engineer at the DeLaval company in Trenton NJ, and followed her husband. With Europe still emerging from the ravages of World War II, Iacopo found his first teaching assignment at the University of Pittsburgh. Many other moves followed, bringing them to live in California, and eventually to Rhode Island.

In 1961, after the birth of their daughter, Clare and Iacopo moved to Italy, living first in Pisa and then in Padova. During all of those years of marriage, Clare and Iacopo travelled the world, first visiting and hiking in the American West, then travelling all over Europe, and eventually living in Japan.

The daughter of humble immigrants met many illustrious intellectuals during her life and saw and lived in many diverse places.

After Iacopo’s death in 1987, Clare moved back to the United States and lived in Bucks County, Pa., close to her family. Nineteen years later Clare moved to Alexandria, VA in the early 2000s to be near her daughter and her two young grandchildren.

She is survived by her only remaining sister, Lydia Hatterschide, her daughter Adriana and her son-in-law Peter Kaplan, her grandchildren Jacob and Christopher, and many nieces and nephews, both in the United States as well as in Italy.

She will be truly missed!!! Rest in Peace mom.

Plant a tree in memory of Clare by clicking here.
To send flowers to Clare's family, please visit our floral store.

A service summary is not available

Plant a tree in memory of Clare
An environmentally-friendly option

Plant a tree in memory of Clare

9 trees planted in memory of Clare

There are 4 photos available in the gallery

Your friends and colleagues at DOL

May your memories of your mother live on in these trees. We are deeply sorry for your loss.
Your friends and colleagues at DOL


A Grove of 3 Memorial Trees was planted in memory of Clare A. Barsotti

May your mother’s memory and the love you shared sustain you through these first difficult times. She must have been a force of nature to have produced such a phenomenal woman as you Adriana.
Xoxoxo
Wendy and Ira Kitmacher


A Grove of 3 Memorial Trees was planted in memory of Clare A. Barsotti

My lovely Aunt Clare will always be remembered how she took care of people. She was kind, generous, thoughtful, caring, concerned, long-suffering, considerate, talented, smart, skillful, accomplished, motherly, protective, nuturing, loving, devoted, comforting, understanding, demonsrative, demanding, suggestive and more. Like Grandpop would show me how to splash alcohol on my face to beat acne and how to gargle with salt-water for colds, Aunt Clare would always tell me to eat better to live a long life - she proved it!
I think It must have all started when her parents Dian and Joseph Lucidi went to Cuba in 1934 looking for a "rum opportunity!" leaving Clara in charge of the 5 sisters. Or when the sisters had to sit on top of the backseat to hide the "distillations" on a run to Atlantic City. "Officer it's just my innocent 5 daughters!" Going to the Italian-American Sportsman club to see her father with the NJ State Shooting Champioship in 1933. There were always family gatherings at the Lucidi's - Dina Nalli's family, Aunt Mitha, Aunt Freida, Uncle Renall, Charlie (Italo), Sparky playing his mandolin, Art Bartolozzi and many others. It was the depression - Grandpop taught me how to use 1 sheet of paper towel to dry your hands and hang up to dry for re-use. The original recycler! No cell phone - there were hand me down clothes - Lydia the youngest even used Renee's wedding dress! All the sisters learned how to play the piano, Mozart, Chopin, and Beethoven. They would cover for one another as some would sneak out of the house. We visited the Barsotti's in Brown University where Aunt Clare cooked green pasta and Adri had a wonderful Ilight Italian bike with thin tires! When they went to Italy we got these great reel-to-reel tapes and listened at 1115 Revere ave. to the Barsotti's across the ocean - again no cell phones - we got old news! Then Aunt Clare and Uncle Iacopo came to stay in my room and Uncle Jake put aluminum foil around the windows to keep the light out because he was up late working on Algebraic Geometry. He discovered the Barsotti-Tate groups in equadimensional hyperdomain.. Then we went down the shore and I remember Uncle Jake bundled up with only his white nose sticking out! One time I met Iacopo in the teachers lounge at Princeton Advanced Studied smoking his pipe, the place oozing with professors and knowledge. When Kurt and I went out to dinner with Uncle Jake and Kurt and I were talking about work, he said, "Is that all you're going to talk about!" When I asked him a question about calculus, that was like 2+2, he was trying to solve bigger questions about the universe. When Uncle Iacopo died in Italy, my mom, Ida called Aunt Clare asking if she should come ove.r. Then a year later my parents went to Italy and Aunt Clare took care of my mom. My mom and Iacopo died on the same day 1 year apart - Oct. 27, 1987 & 1988. My Aunt Clare was very proud of Adri and Peter getting married in New Hope and then pround of he her grandsond Jacob and Christopher. She was always talking about them. Then Aunt Clare moved to Yardley. When we moved to Wrightstown, we got to see Aunt Clare and Aunt Laura alot. We hosted Clare's 80th birthday party at the house and that was 17.5 years ago! The 2 sisters and Aunt Cassie McGuire would take the Yardley train into Philly to see a play - such swinging ladies! The best thing both sisters did was to move south close to their daughters.. Adri, and Marta both did a wonder job of taking care of their mothers in their last days and years that will always be remembered. I will always cherish the time I got to spend with my Aunt Clare and so will Liz, Joey, Colleen, and Erika - they have many pleasant memories.

My lovely Aunt Clare always cared for others.  It all started when my grandparents went to Cuba in search of opportunities that Clare was left in charge of caring for her sisters.  Throughout her life she was a great lady, kind, generous, caring, loving, thoughtful, concerned, long-suffering, considerate, talented, smart, skillful, accomplished, motherly, devoted, nuturing, protective, understanding and more.  She would tell you how to live well, like Grandpop would tell you to splash alcohol on your face and gargle with salt water, Clara would tell me to eact better to gain a long life - she certainly did!  She learned to sit on the backseat of the family car to hide the "distillations" while Grandpop would make a run to Atlantic City!  "Officer it's just my 5 daughters!".  She would attend the shooting matches at the Italian-American Sportsman club, where her father was state champ.  There were always visitors at the house in Chambersburg from mom Dina Nalli's clan, Aunt Mitha,, Renell, Italo, Charlet, Sparky playing his mandolin and Art Bartlolozzi and others talking about the home country..  All the sisters learned how to play the piano, Mozart, Chopin, - no cell phones and hand me down clothes - Aunt Lydia was the last in line to get clothes - she even had to use Renee's wedding dress!  Grandpop taught me how to use 1 sheet of paper towel and hang it up to dry for re-use!  The original recycler - it was the depression! I recall visiting my Aunt Clare in Brown University where she made green pasta and Adri had a cooll Italian bike with thin tires!.  Then at 115 Revere Ave. we would get these great reel-to-reel tapes from Italy.  Then, Aunt Clare and Uncle Jake would stay in my room, and Iacopo would put aluminum foil on the windows to keep the light out - he was working late in the night on Algebraic Geometry - he wrote many papers and invented the Barsotti-Tate equations.   Then we went down the shore and Uncle Jake would be all bundled up with just his white nose sticking out! I visited Uncle Jake in the lounge at Princeton Advanced Studies..

A beautiful tribute to an extraordinary woman.  May her memory be a blessing.

Plant a tree in memory of Clare